Banos, and some more time in Quito

After so many days spent in cities and towns, I was pleased to jump into a van with a dozen others and make the 2 hour journey to Secret Garden Cotopaxi; based in the valley between 5 or 6 volcanos, all dormant except Cotopaxi, who is now overdue for a nice big explosion. Slight catch is that the most telltale sign: an ominous bulge, cannot be seen due to the giant glacier that covers the top of it. When she blows, it very well could be a complete surprise.

Despite this, I massively recommend spending at least a couple of days here if you're passing through Ecuador. There is no internet apart from emergencies, all food is included, and you can pass your time with energetic walks to waterfalls or up volcanos, or instead relax in the hammocks outside, swinging slightly in the light breeze and drinking a cup of tea as you while away the day. Very enjoyable.

Now accompanied by three others, two English girls and an American guy, we split the cost of a taxi to drive us down the PanAmerican highway (lovingly referred to hereafter as the PanAm) through Ecuador to Baños, with a brief detour through the Quilotoa loop. The loop is a 32 KM hike around the lip of an extinct volcano, now a giant lake that fills up the crater. We didn't have time or energy to hike the entire loop, but instead walked down to the lakeside and back up again; an energetic 90 minute hike past donkeys and dogs that conveyed or followed the tourists that didn't want to do it themselves. If you enjoy excellent views, beautiful lakes and a good walk, then I highly recommend this one too.

From here, after a brief detour back through Quito (which I used as an opportunity to return to Zao, a pan-asian restaurant up in the New Town, that does fantastic Sushi and a really good Vietnamese soup - worth it if you like your Asian food), myself and a different three people started our long journey up to the Colombian border. Getting here is not a simple, or even safe, prospect. While much better than it was a couple of years ago, we still needed to take the first bus up to Tulcan, the border town on the Ecuadorian side. Bouncing through the hills, it takes about 5 hours from Quito, and passes through Otavalo, the largest open air market in South America.

Change money on the Ecuador side, either here at the bus station, or at the border. The rate is a little better than in Colombia, though as always, haggling is a must. I kept a few emergency dollars in reserve in case they were needed, and then we headed for the border by taxi. You can't walk effectively, it's about 8KM away from the bus terminal through rolling hills, so grab a few other gringos who will no doubt be loitering around and head to the border. Make sure you have not lost your Andean card! This is the small piece of (admittedly easily loseable) paper you were given at entrance to Ecuador. After stamping out, it's a short walk across the bridge to the Colombian side, where you get stamped in after answering the short questionnaire. Every other border in South America has usually been a brief look at me, a mumbled word or two and then a stamp, but Colombia wanted some extra info, including when and how I was leaving, what I did for a living, etc. Nothing too onerous however.

And then, into another taxi into Ipiales. This small border city lacks much to do except for the breathtaking Las Lajas church that spans a gorge to the north of the city. Built in a beautiful neo-gothic style, it's worth spending a couple of hours to swing by and check it out. 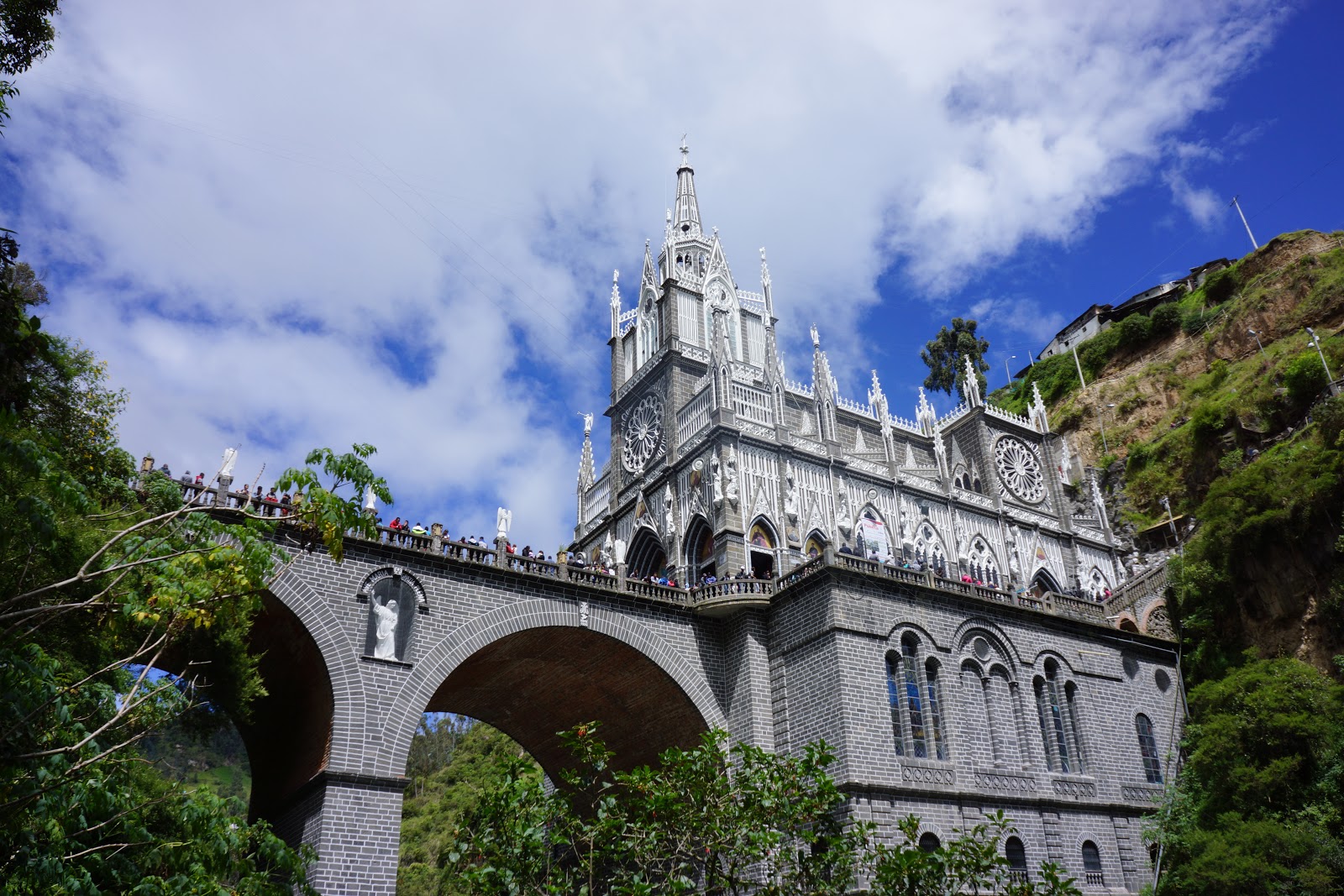 While even 18 months ago, it was highly discouraged to get a night bus from Ipiales, these days it's safe enough, and preferable to spending 12 hours bouncing through the daytime to Cali, the next city north. The buses are cheap and comfortable enough to sleep in, but if you prefer to wait until the next day to proceed, there are a handful of cheap hotels in Ipiales to spend the night. I can't recommend Hotel Belmont(e), which Lonely Planet does, because the staff are rude and dishonest. If I was to repeat the journey, I would just have seen the church and jumped on the first night bus I could. Make sure you grab your bus tickets early though, as the queues after 6PM were astonishingly long.