Now that I'm finally out of Mainland China, I can put pictures up, so I've now created an album on Facebook with my various snaps so far. More to come, I promise!

So, here's me with my travelling scruff, which last night I finally bit the bullet and shaved off, I couldn't stand the itchiness any more! 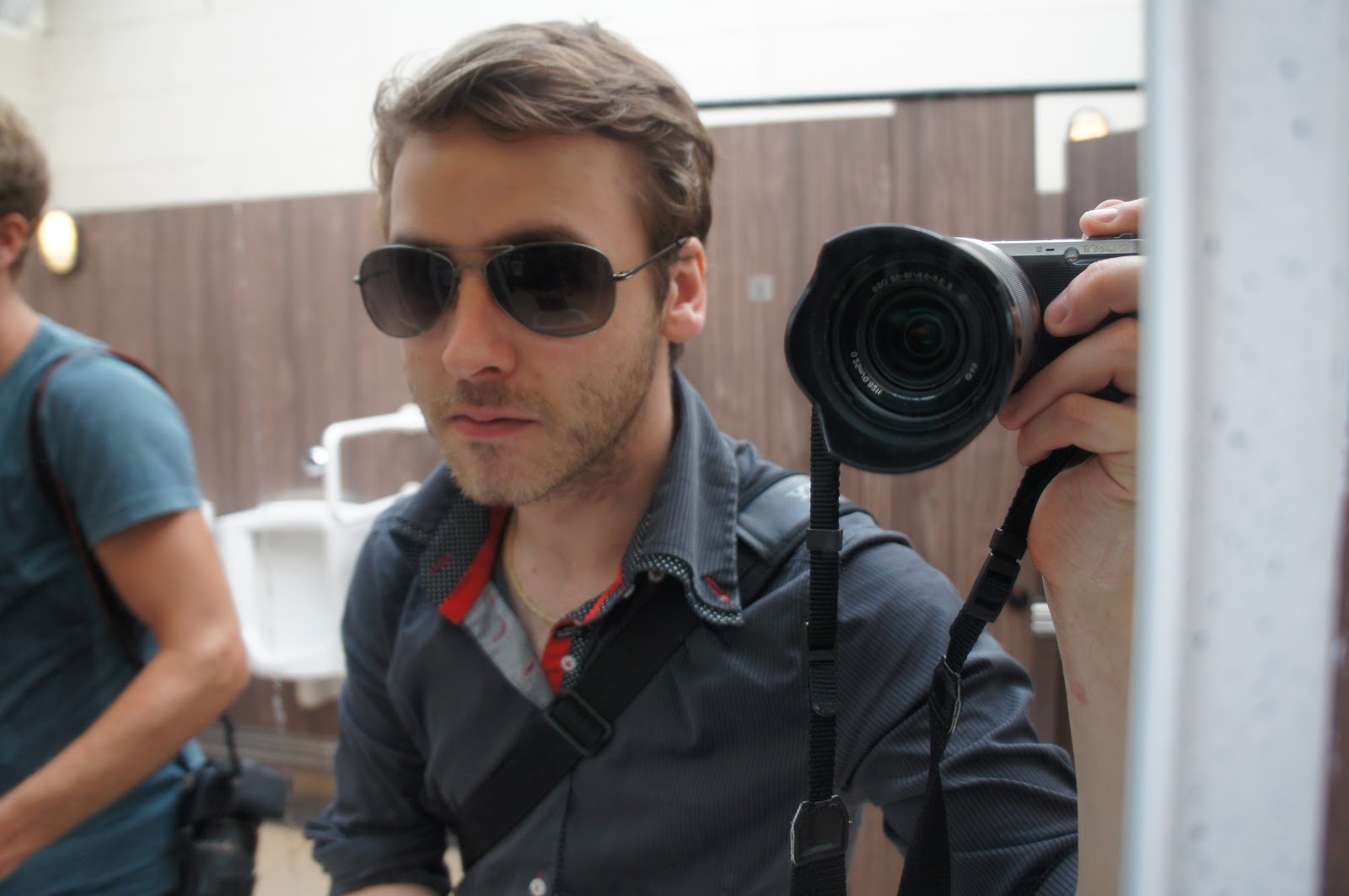 So, after a very pleasant evening back with the Wada team, and now proudly wearing my Wada t-shirt, I woke up early and headed for the airport. I arrived with an hour to spare, and found queues across half the airport, where with only three counters open, they were trying to check in 7 flights (I wish I was kidding) at once. I made it through, and headed for security, where the female security guard dived into my pants with gusto to pull out my money belt. This was the most intimate contact I've had for some time, and had to stop myself from asking if we should be getting a drink before we got into second base. Maybe get to know each other, you know?

Anyway, knowing that security guards never have a sense of humour, I kept my mouth shut and headed for the plane. Quite the uneventful flight, helped by it being brief, and then boarded the cross-border coach bound for Hong Kong.

For anyone following, it's a pretty simple affair to cross the border, just make sure that you get on the correct bus at the other end. The people are pretty helpful, I have a feeling they're used to tourists heading across to Hong Kong. I'm sad that the border agency has now stopped the practice of stamping passports (I wanted a stamp... ), now electing to provide a small, easily lost piece of paper, that you need to sacrifice when you leave the island. I can foresee this slipping out somewhere and getting detained in a small white room at the airport tomorrow, but we shall see.

Plunged once more into a location where I don't speak the local language (Cantonese is used here, not Mandarin), but it hardly matters; everyone here speaks English. In a moment of madness, I ordered two bottles of water in Mandarin, and the woman looked at me like I'd asked for a decapitated raccoon (for all I know, my tones were so bad I might have done), before responding in perfect English that it was 10 dollars please. Sigh. 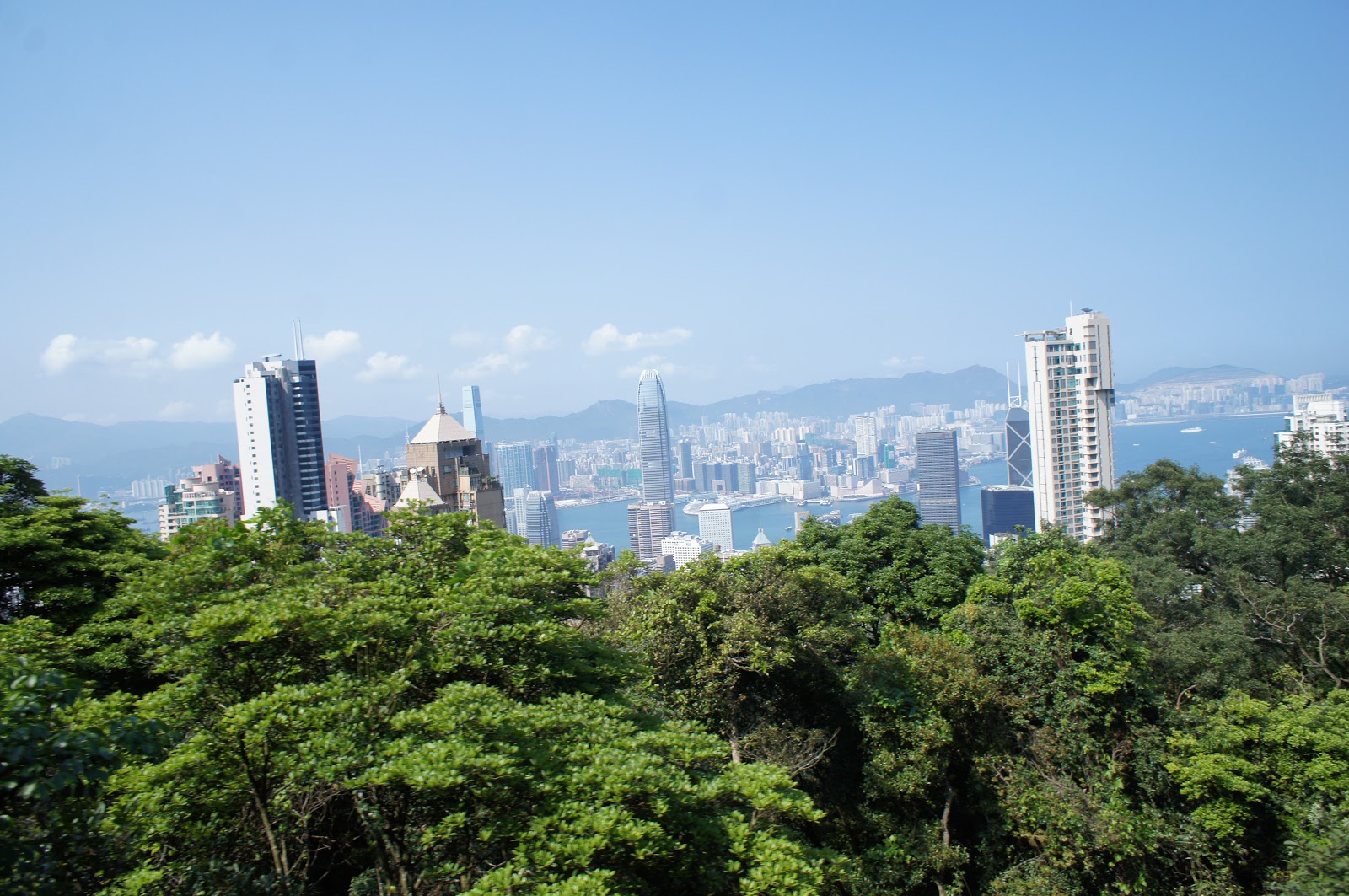 After a quick break, I headed up to the peak on the tram, which required queuing for an hour, as this was apparently the first time it wasn't foggy for over a week. I can believe this, Guangxi was cloudy for the entire duration of my visit, and this morning I awoke to pea soup. The view was spectacular, and for a while myself and another friendly German (whose name I'm humiliated to have forgotten. This is nothing strange, I've managed to categorically forget the names of basically everything I've visited on this trip, hence the perhaps strange reason I've called things 'the mountain' or 'the hostel'. I apologise) walked around the top of Victoria Peak (I googled that, forgot it too), attempting to find the best vantage point without shelling out another $40 for the 'Rooftop Skysomething peak 428 amazing 360 degree view of amazingness', and managed to get in a few good snaps from a small area just east of the building.

Jumping on the world famous Star Ferry, we travelled over to Kowloon, deciding to walk along the Avenue of Stars and watch the Laser Lightshow from across the river, which had awful music and was altogether underwhelming. But still, another thing checked off the list.

This morning, still hardly believing that it's my last day in mainland China, I headed out to the Man Mo temple, which has dozens of incense coils draped from the ceiling, and richly decorated with bright red lanterns. It was nice to finally reach a temple again after the insane hustle and bustle of Hong Kong.

I'm a bit torn with the city, half of me loves the incredible mix of people and cultures (after seeing almost no westerners in Mainland China, the number of expats is quite incredible), but the other half of me is disappointed with how... grim everyone looks. Here you have a collection of people, most of them incredibly beautiful, dressed like super models, all speaking a huge range of languages, who all look like they're stunningly successful business people, relaxing in trendy bars and a jaw dropping variety of restaurants, and I've yet to see a single person smile (outside of the Hostel, the Check Inn, which I'm pleased to report is cheerful, charming, full of friendly people and in a great location).

Perhaps it's my own view tainting my vision, as next to people this... well... cool (there's really no other way to describe the individuals around Soho), I feel like Mr Blobby. This does seem like a really incredible place to live and work, I feel like I'm in the middle of a whirlpool of activity, and it's nice to be a part of that in some small way. I think I'll need to return with some nicer clothes.

Apart from the seemingly endless walking I've done, I've taken some time to eat Dim Sum at the famous Luk Yu teahouse (where the tea was nothing short of spectacular, and the Dim Sum pretty amazing to boot), visited the Jamia Mosque, and took a couple of hours to visit the History of Hong Kong Museum. I left a sad man. For quite a long time, I've silently judged other cultures for not teaching their children about the crimes committed by their countries in the past, and wondered how it could be allowed. And yet, here I am, oblivious to the things that Britain did in the late 1800's to China. At least, until now. I'm now left thinking about what else I don't know, probably a lot. Probably too much.

You're the best for reading, thank you!