A thought on scale.

So yes, perhaps no longer a travel blog, but an excellent place for me to get some bits and pieces of interesting information down. At least, I hope it's interesting. You'll have to decide for yourself whether or not it's something interesting really... I'm going to stop using the word interesting.

*Digs up a thesaurus*

Fascinating! There we go.

Distracted already, and I'm three paragraphs in. Getting on with it (cue the Monty Python crowd), recently I was at the Larmer Tree festival, helping my friends Lorraine and Emily with their food serving business (called The Farmhouse Kitchen by the way, link is here (might as well get some promotion in...)) and I was discussing the size of space with a friend named Debs. I realised, that most people actually can't get through their heads just how ridiculously large space is. Or rather, the fact that people find themselves even remotely significant when faced by the size of the cosmos is shocking. Let me start.

Our solar system shouldn't be much of a surprise to you. It was in our school textbooks, a nice little diagram of our planets heading out in a line from the sun. The scale of this can be a bit misleading in two ways. Firstly, the distance from Earth to the Sun is around 150 million kilometres. The distance from Pluto to the Sun is about 39 times this. It is not a linear scale! This shows the relative scale of the planets in our solar system:

If you had a spaceship that could travel at the speed of light (~300,000 kilometres per second. To understand how fast this is, the circumference of the Earth is 40,075 km, so every second you could travel around the Earth about 7 and a half times) it would take you about 7 hours to reach Pluto. We're ignoring the side effects of travelling at that speed of course. Sadly, we are not capable of getting anywhere close to that speed. The fastest man made objects we've been able to produce are Voyager 1 and 2, which are speeding away at around 56,000 kilometres per second (which is pretty fast, around the earth and a bit in a second) towards the edge of the solar system.

Or so we think. In reality, Pluto is no where near the edge of the solar system. Pluto actually fluctuates between being closer and further away than Neptune, but it's average distance from the sun is 39AU. An AU is an 'astronomical unit', defined by the distance the Earth is from the Sun. Voyager 1 and 2 are just entering the Heliopause, which is a swirling pool of radiation at around 90 AU from the Sun. The Oort Cloud, which is the furthest thing we know about within our Solar System (well, I say 'know', it's predicted) starts at about 50 thousand AU from us and could go on to 100 thousand AU from us. That's 15,000,000,000,000 kilometres from the sun. A long way. Time taken to get there? For Voyager 1 (the current fastest man made object, currently moving at ~61,000 km/s, about 3 AU per year), that'll take it a good 15 thousand years or so. Then again, some scientists view the Heliosphere as the 'edge of the solar system', so some might say they're approaching interstellar space. But this is still the distance from the sun to Pluto doubled and then a bit. (And the Kuiper Belt is in that gap somewhere too). 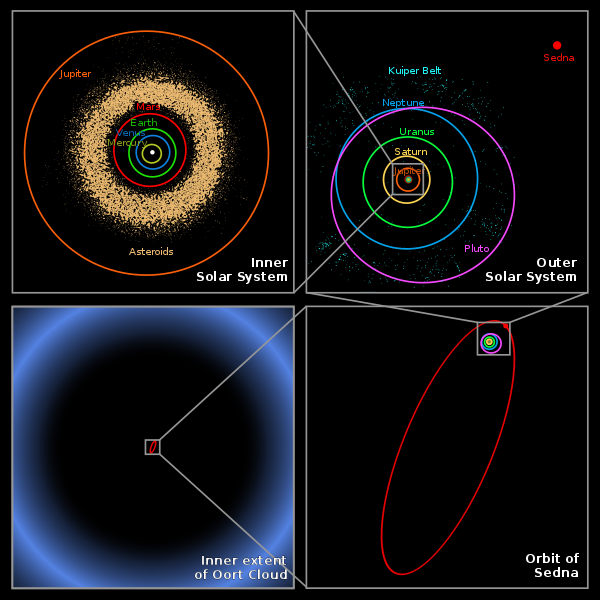 Not that it matters too much, if you look at our next nearest star, at it's current velocity it'll take Voyager 1 73,600 years to reach it. That's a little more than we have been sensible humans for (I say that, because we were a bit like apes before hand, we existed for about 4 times as long previously beating each other with clubs. Saying that, we continued to do so for a long time afterwards too...) And actually, if you consider that distance to Proxima Centauri, which is about 4.2 Lightyears distant, it's a relatively short one compared to the majority of solar systems. Our nearest solar system with planets is Epsilon Eridani at about 10.5 light years away. Minus ten years from your age, and imagine what you were like then. When you look up at the sky and see Epsilon Eridani, you're seeing the light from that period of time. It is so far away, that it takes 10 and a half years for the light from that planet to arrive here.

I'll explain this further, if Proxima Centauri went Supernova (it won't, it's too small), it would take 4.2 years to reach us. It could have exploded a year ago, and we would have no idea about it. When you look up into the sky, and see the stars there, you are looking at history, some of it so old that it's from before humanity existed and back into the ages of the dinosaurs. Pick up a telescope, and you can see history from before the Earth existed.

The centre of our Galaxy then, is about 27,000 light years away, at current speed records that would take Voyager 1 approx 500 million years, give or take. The likelihood of us ever reaching anywhere near this distance is almost nil. I haven't even started to explain the Theory of Relativity yet, which gives added complications to travelling fast.

Our Galaxy then, the Milky Way, has 200-400 billion stars in it. This is such a colossal number you cannot even begin to imagine it. And the Milky Way is only one of 170 billion galaxies believed to be in the known universe. Most of those are many times larger than the Milky way, containing up to trillions of stars and solar systems.

And then, finally, the Universe. I won't take up too much more of your time, but I'll leave you with a quote from a fantastic book called 'A Short History of Nearly Everything' by Bill Bryson, which says if you took the expanded Universe and wanted to measure how far it was across in Lightyears (that's 94607304725808 kilometres per light year) you wouldn't have ten zeroes on the end, or even a thousand, you would be dealing with millions of zeroes.