I'm getting worse at this whole keeping up to date thing with the blog aren't I? At the moment I seem to be drifting closer to the 4 day update rather than the bi-daily. The reason is due to very early morning trains and long days seeing sights! Exhausted Andy is not a writing Andy. I'll try harder though, I promise!

Anyway. Moving swiftly onto the juicy bits. Jaisalmer, the desert fort, was magical. After our overnight desert safari with our new friends (1 Italian, 2 Americans, 2 French, 1 Tunisian and us), our legs burnt from the bumping. I had been granted the reins of my camel (called Mr Singh) and soon figured out how to make it trot, which was painful. You would think they would invent stirrups for camel saddles, but no. No way to stop yourself bumping around like a sack of potatoes. I had invested in a pathetic quality cowboy hat to stop myself tomato-fying, and so felt like a cowboy of the desert, my bandana pulled up over my nose to protect myself from the flying sand, and here's my shadow: 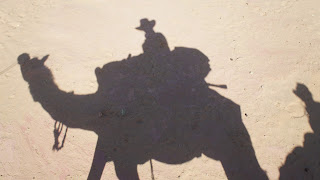 Our guys ranged from great to meh. One of them had a little temper tantrum at the Tunisian and French girls when he wanted to ride on the camel with one of them. We needed to move quickly, so all of them jumped up, and I had my own passenger. I didn't mind so much, I think I'm used to the lack of personal space in India now. Personal space is like trains running on time or shopkeepers not trying to squeeze every last rupee out of you. A nice idea, but there's no need for it in India.

The sunset was beautiful, giving a mix of blazing orange, a deep blue sky, and stars pocking through the atmosphere at the top, allowing us to snap some jaw dropping pictures of our silhouettes, which is now my Facebook picture! I pulled out my camera and got a'snapping, and here are a few of my favourites:

The man who invented the 10 second picture trigger needs a medal. A really really big one.

Yes, I really took all of these pictures. I can't believe it either, but it's true. Scary. Moving on from the ego boost in my own direction, as the others learnt curse words in Hindi (the American guys) I walked alone to the top of the sand dune, lay down on my back and looked up at the stars. Bright, clear and peppered with some gorgeous shooting stars every now and again. Turns out I lost my wallet up there, which Lim returned the next morning with an amused glint in her eye. Woops. I wouldn't have realised until we had returned to Jaisalmer, and someone would be a few thousand rupees richer and have my drivers license!

We returned to the guest house, owned by the tour people (Ganesh Travels) who gave us a shower (cold) and a place to relax until our train to Delhi at 5:30. I hung our towels on the roof in the sun to dry, and Aya retired to a dark room for a nap.

Finally, my trust in humanity paid off. The hotel was pretty much run by a Nepalese guy, who was genuinely nice, didn't try and rip us off, and when we climbed aboard the train, realised we had left our towels on the roof and I had taken a rickshaw back to the hotel, he insisted I jump on the back of the bike and had the bellboy drive me back for free. So I would like to officially recommend Hotel Ganesh in Jaisalmer.

The train journey was uneventful, except for me finally sleeping like a log after the exhausting camel safari. We had the top two bunks, so were warmer, less disturbed and safer than previous journeys. We awoke and waited until the train pulled into Delhi, nervous about the stories we had heard regarding the capital of India. After stepping off the train, a taxi driver offered to take us to Paharganj (the budget area) for a 'mere' 350 rupees. The correct price for this distance is - wait for it - 40 rupees. I informed him he was insane, and we walked to the metro station. I suppose they're used to rich tourists here who haven't figured out how cheap things are. Then again, the government isn't much better, charging Indians 10 rupees to get into monuments and tourists twenty five times as much. No. I'm not kidding. Could be worse, the difference in price between Indians and tourists for the Taj Mahal is 37.5 times as much. Blimey.

The metro is scarily efficient. I have never seen trains this frequent before, and the system in place seems like something from Dubai or Japan instead of India. Small round tokens for standard trips (these have a microchip in them which can tell the terminal to let you in/out) and e-cards for the residents. The trains are so frequent that if you lean out over the tracks, you can see the headlights of the approaching train, and, turning left, can see the tail lights of the one that just left. Pretty awesome, and a good way to escape exorbitant rickshaw fees like Jaipur!

We jumped off at the New Delhi train station, Chandni Chowk Metro stop, and proceeded to get very lost very quickly. The map in Lonely Planet helpfully tells you that Paharganj is directly in front of the train station. What they fail to mention is that the metro station is on the east side of the station. Paharganj is on the west side. So, while frantically waving off the thousand or three rickshaw drivers who wanted to take us a kilometre for our right arms and our first born sons, we walked off in completely the wrong direction. The frustrating thing for followers of us is that the security in Delhi is insane. You can expect a full airport-style bag x-ray, frisk and questioning every time you enter a metro station, train station, tourist site (Red Fort, Taj Mahal etc) and some parks. This makes passing through the train station a royal pain in the ass, so if you'd like to avoid this, making a left and then walking over the bridge (above the train tracks) will take you around to the other side.

Paharganj is a giant maze of tiny alleyways, bustling noise, great smells, dirt cheap shops and travellers. Expect to fight a decent fight in order to get a cheap room, the owners here are used to new travellers arriving by the planeload and not yet knowing what a cheap room is. We talked our guy from 500 down to 400, and stayed in the small but okay Travellers Guest House, on the Main Bazaar in Paharganj. Hot water, nice manager, comfortable beds and surprisingly quiet, but we shared our room with a veritable army of cockroaches and the shower was hand held only. But really, quite a good deal if you don't mind the bugs. And yes, I want to mention the hot shower again. So. Good.

Delhi is a crazy, manic, noisy, smelly, dirty whirlwind of a city. Cries from rickshaw wallahs to be their fare, shopkeepers insisting to have 'just a look!' and the occasional guy who (yes, this really happened) insisted I had been looking for him, knew him well and had promised to give him 500 rupees. As you do.

The Red Fort was a let down, a collection of beautifully designed buildings yes, but all in bad condition due to the British invasion and subsequent demolishment of most of the Mughal architecture. Here, and Gandhi Smirti (where Gandhi died), were endless rows of boards discussing the history from 1857 onwards. Basically slagging off the British for a good few thousand words. Amusing to read, but also interesting, as a lot of what was written I have never heard about before. They seemed to stress the 'winners write history' part, hinting at war crimes that the British committed but were never recorded. Something to think about. Gandhi Smirti was a solemn and informative collection of information on the 'Father of the Nation'. The respect that this man is held in in this country is jaw dropping. In stark comparison to this, I am sad to report the distinct lack of respect Hindu's hold for Muslim holy sites, and vice versa for the Hindu sites. Repeatedly you are asked to not take pictures, to turn off mobile phones and people blatantly and pointedly ignore them in front of others. The Taj Mahal had rubbish thrown into the bushes! In the Taj Mahal! It really shocks me to see the distinct lack of respect most Indians have for others, and I've seen it through the entire country.

I digress. In Paharganj, if you head west along the Main Bazaar, you'll eventually reach a crossroad. Maybe 5 minutes from the station. From here, on the right you will find a small shop called Tea India. Make a right down the walkway here, and you'll find the hotel/restaurant Navrang. This is a dirt cheap (chowmein for 35 rupees!!) seriously good tasting (chowmein is SO GOOD) restaurant that Aya insisted I recommend due to the Japanese food served here, and which I was happy to do due to the fantastic food I myself had.

We left Delhi at annoying O' clock in the morning (not as bad as stupid o' clock, only 6 ish) and caught our train to Agra from Nazrat Hizamuddin train station. Once again second class, but this time not so bad.

Right. That's about it. We also dropped down to see the Qutab Minar, but didn't go in due to time and price restraints. I also spent a large amount of money on a new lowepro backpack so I could carry my camera plus other stuff without getting back pains. And I must say, I love it.

That's about it! Questions in the comments section please, and I'll do my best to answer. Agra in the next post, tomorrow.